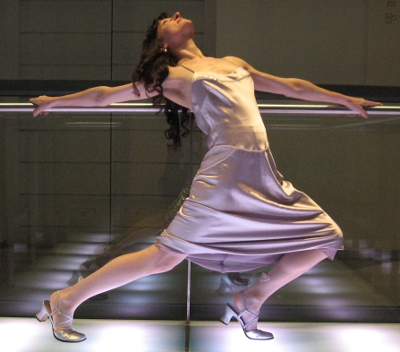 The epidemic has people restricted to their own homes for months. Long winter nights... Isolation, weariness, boredom and fear wear on us all. Up late with the light on - you realize you are not the only one gazing out the window ... there are other lights on out there ... And there was a way to connect and to dance 'together' and a way to make art - even if it was one by one in a terrace apartment with a smart phone on the balcony in the snow.

12 minute solo dance to music by multi- media artist Emil Memon to accompany his dance track by the same title. 3 in the morning is party time - it's club time - it's deep into the night dancing time - it's 'maybe I shouldn't have come out tonight' time, it's 'how am I going to get home' time ... it's 'this is awesome, I hope this night never ends' time ... it's that time when you cannot go any further into the night without starting to come out the other end, in morning. Maybe that is where we are in 2020 and beyond, with crises of climate and capitalism - we want to keep going, keep parying on, but the night is waning and our insecurities are starting to break though our confident facade.

Dance for film; Ljubljana, Slovenia https://youtu.be/_XR9zmXoq8Q
It’s a place of movement, where people enter and exit, and circle around past the doors of other’s homes. They come in with dogs, groceries, packages . . .sometimes they go out one day and come back another with one more member of a family. That space holds witness to so many comings and goings. This chapter of Spiral Staircase is a reflection on one of the stories this staircase might tell – the unexpected encounter, the surreptitious delay, the subtle, complex, delicate counterbalances between two who meet there. The relationship progresses and develops – not along a straight-forward line, but circling and spiraling back on itself, sometimes deeper, sometimes higher.

(work in progress) the magnitude or intensity that must be exceeded for a certain reaction, phenomenon, result, or condition to occur or be manifested; the minimum point at which a stimulus is of sufficient intensity to begin to produce an effect.

Created by Robin Becker Large Ensemble piece, inspired by book They Marched Into Sunlight about events in Saigon and Wisconsin during US war with Vietnam. Performed in Ho Chi Minh City, Hanoi and Halong on shared peroformance with Together Higher contemporary dance company of Vietnam.

Performance and Choreography by Nicole Speletic, Performance and Song by Olgierd Minkiewicz
a work for one dancer and one musician performing live together;
We have tools, devices, methods for finding the straight line path when we need it - in cartography, in construction, in mathematics. But what about for us - in our lives - what is there to help us to find the path that will take us straight to where we need to go - point us to the exact correct point amidst all the contradictory indicators? Close your eyes, listen to the song in your heart, and follow it blindly? Performed on June 2nd at residency showing, Salvatore Larussa Dance Company, Inc/ The Academy, Middle Village, NY

Choreography: Nicole Speletic. Dancer: Nicole Speletic. Singer: Malina Rauschenfels.
Two-part work to a Bach cantata sung live. A brief composition, employing gesture and realism to express sorrow, acceptance and finally a renewed resolution to celebrate our lives. This is a development of the piece originally created as a memorial for a friend. (WAH Center, Williamsburg, Brooklyn, NYC)

Collaborative performance piece for Slovenian National Culture Day celebrations in Sostanj, Slovenia, consisting of all original elements including an image collage with sound score (by Boštjan Perovšek), a revised version of the solo work To the Core, and an interactive section for dancer and clay sculptor using live projection animation within a structured improvisational score. The whole work focused on the overlap and separations between the ‘human’ and the ‘natural’, and the desire to get to the heart of one’s ‘true nature’ and break out of constraining, external and internal forces.

Revision of Not an Apple performed at International Dance Week Festival, Ljubljana, Slovenia

This work tries to capture something of the fragile nature of engaging and connecting with another; the missed connections and false starts, hesitations and compassionate impulses that somehow become friendship. Revised version of first section of two-part duet originally created in 2009 for the Peace and Non-Violence Colloquium.

This piece evolved into an exploration of the attitudes and feelings we have about the principles that structure our lives, and an imaginative play on the pun of universal construct and constructing a universe. Collaborative project with Sue Bernhard, a 10-minute solo of dance and movement for myself set to John Cage selections and silence.

Structured improvisation for group of dancers in theater aisles, a movement choir for three sub-groups, and two individuals moving through and interacting with groups, accompanied by dancing musician improvising on cello and voice.

A one-minute gesture piece created in 2 weeks to an assigned one-minute long piece of music. Music: Polly-Moller. Choreographed and performed by Nicole Speletic.

I was one of three modern dancers selected from a New York audition and rehearsal period to participate in creating new repertory, rehearsal and performance in Ljubljana. This was an international dance and music production directed by Slovenian choreographer Saša Staparski-Dobravec and sponsored by the mayor of Ljubljana, Slovenia and the American Embassy in Slovenia.

Dancer for the creation and performance of two new works in an evening of original dance and music, by Laura Flowers (formerly of Gabriel Masson and Dancers) and Gilles Obermeyer at Cunningham Studio, April 1-3 2005.

Dancer for the creation of the first version of Revealing Isadora, a contemporary dance performance celebrating the life and work of Isadora Duncan for soloist and three supporting dancers, performed at University Settlement, NYC.